Almost 6 years to the day since my first outing representing the GB age group team in Auckland and I was off to Santa Eularia, Ibiza for my 5th GB race, this time for duathlon, rather than triathlon.

I qualified for this years European championships at the 2017 championships in Soria, Spain. Both in Soria and in Alcobendas (Madrid) in 2016 we had extremely bad weather for race day, so we were hoping the weather would be better in Ibiza! The forecast leading up to our trip had been quite unsettled and it looked like there might be thunder storms during the race, surely it couldn’t be another year with extreme weather for race day??!!

This year hasn’t been great for me fitness wise, I withdrew from London Marathon just days before the race with a couple of injuries and wasn’t able to start running until early August. At that point I was ready to withdraw from the Europeans but decided to give myself a target of getting up to running 4 miles by September before deciding. I’d found my Achilles injury especially hard to clear and had tried a variety of things but a good physio friend advised me to reduce the number of calf raises I was doing to just 20 a day. Simultaneously I decided to change my shoes, I’d been running in Adidas boost for years but the latest version had had a major face lift, from articles I read and a friend with a similar problem it seemed these may have been responsible for aggravating my Achilles. With these two changes in just a week my Achilles improved dramatically and from then onwards I continued to very carefully increase my mileage and training intensity and started to believe I might be able to compete.

I started going back to the athletics track in September, to start with I did a reduced set at lower speeds and then gradually increased the volume and intensity. By the end of September I was getting up to running 5 miles so I committed to racing at the Euros with my sole aim being to finish the race.

My injuries have made me appreciate more than ever how lucky I am just to be able to do all the sport I do; ride my bike, run, swim and play badminton, tennis and squash.  Its been a tough season but throughout I’ve stayed strong and determined and my motivation hasn’t faltered, competing in the European Championships is just a dream that I’ve worked so hard to achieve over the past few years.  I was so committed to do all I could to get to the start line, never to give up and to believe in myself.

By the time we flew a couple of days before the race the forecast had changed and it looked as though we would escape a thunder storm for the race. Even so we packed hats, buffs, gloves and waterproofs, just in case!

Once we arrived in Ibiza it was time to rest up and relax ahead of the big day, we’d found an amazing hotel with an infinity pool on the roof!

Since my first race for GB in Auckland in 2012 I’ve come along way with managing my nerves, I used to feel sick for days leading up to the race and had to isolate myself from anything that would remind me of the approaching race.  I’ve learnt to embrace the nerves and turn them into positive energy now and with this I’ve been able to soak up the atmosphere leading up to the big day.  I describe it as putting them in a box, the nerves are something I like to keep wrapped up until I need them!  It helps to get everything prepared for race day, bike built up and tested, numbers on the bike, helmet etc, and then I just sit back and relax, if I’m lucky with a beautiful view!

We had to travel to Ibiza Town to register for the race and for the team briefing and then returned to Santa Eularia for the Parade of Nations on the Friday evening.  The parade lasted a couple of hours and involved parading around the streets following a band dressed up in team kit and with flags all around! 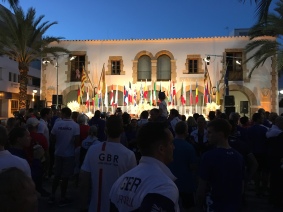 The standard distance duathon didn’t start until 15:30 so there was a big build up and by the time bike racking came around I was feeling quite sick!  I came out of transition to try and escape the build up while I could, this is me (below) trying to look calm!!  There had been a few accidents the day before on the sprint duathlon as the bike turnaround points weren’t very clearly marked so the Team Manager took me through the course.

Discussing the bike turn around with our Team Manager! 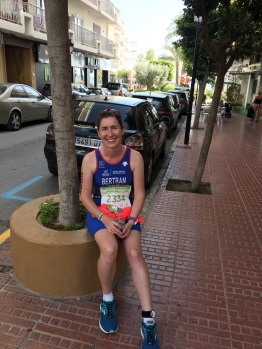 In the days leading up to the race the race organisers had started setting up transition on the beach but a storm brought high waves and much of the wooden planking was washed away or buried under sand.  The day before the race they relocated the transition to the tree lined avenue down from the town hall which made a fantastic setting and also provided some shade whilst we were waiting to start.  The downside being that this changed the whole flow of transition and the routes in and out so it created a little bit of last minute panic among the team.

I had wondered before arriving in Ibiza why the race start was so late, as race day approached I realised this was because it was the coolest part of the day when it would still be light enough for the bike!  It was just under 30 degrees when the race started, not ideal conditions for a 10k let alone the rest of the race! 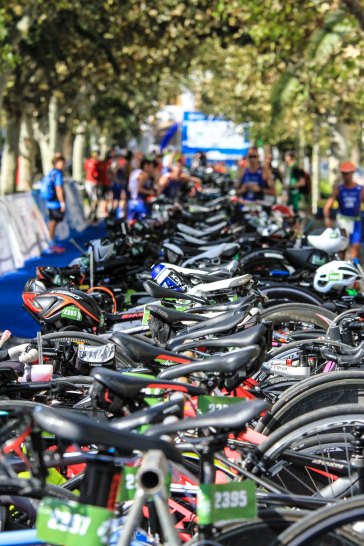 My race plan was to finish and not to be concerned about times or placings, after all just a month ago I was still unsure whether I’d be able to compete, just qualifying in the first place was winning for me.  With so little run fitness it was more important than ever to make sure I didn’t go off too fast at the start, we’d decided I would aim for my marathon pace and that I could try and increase the pace in the second run if I felt I could.  The 10k was made up of 4 out and back loops along the coast and up the estuary.  The start was very fast and I was trying my best not to get pulled along, even so my first lap was still much faster than I’d planned and as I started the 2nd lap I was beginning to have doubts I could carry on!  Then the voices started, the constant battle of the negative and positive voices in my head telling me I couldn’t and then reminding me how disappointed I’d be if I dropped out and how hard I worked.  Looking back on these situations I’m always so amazed of the strength of mind and will power that gets me through, I think its just about breaking it down into chunks and distracting yourself, its all mind games really.  It was made easier by the most amazing support out on the course, I could hear my name being shouted constantly and a group of people on the estuary realised they could get a big smile out of me just my shouting my name and some encouragement, this became a thing every time I passed them, they started shouting to one another ‘here comes the smiler’, and needless to say I smiled even more each time!  I hope the supporters realise what a massive part they play in everyone’s races.

On the first run the heat was just radiating back off the pavements, it was absolutely baking.  There were two water stations every lap and at each everyone was just grabbing a bottle to pour over themselves.

Once I got to lap 3 I started to feel better and was just focusing on how good it would be to be out on my bike, if nothing else I knew it would be cooler with the wind chill.  Because of the layout of transition and the surface I like many others had decided not to clip my shoes on my bike in transition, instead choosing to put my shoes on first and run in them.

The bike was a 4 lap course which like the run comprised an out and back loop, the route took us up and out of the town on beautifully smooth tarmac, just like Mallorca!  It wasn’t a technical bike course at all and there was only a 50 metre rise over the 2.5 mile out section making it a fast course.  In training back home I had used a local road with the same gradient and just trained up and down the road, although the climb there was 4 miles but it had enabled me to check what power output I could hold without my heart rate going anaerobic so come race day I knew what I was aiming for.   I just kept reminding myself not to burn too many matches (based on the theory that every time you go over your FTP you burn a match and you only have so many matches to burn after which point you hit the wall).  The 40k bike course was soon over and as I descended into the town the sun was already starting to get low which made me hopeful the second run would feel easier.  Just 5k to go now, on a good day just 20 minutes, psychologically only having 2 laps to run felt good, the second lap surely would be easy knowing the finish was waiting just round the corner.  The heat had eased off and I felt much better than on the first run, it was just all about keeping focused now and getting back.  The finishing straight was slightly uphill and it seemed to go on for ever but the Team Manager was at the bottom of the hill handing out flags for us to run over the finish with, what a race!  I went into the recovery tent ate almost my body weight in water melon and then came out to find John, I had a lump in my throat and had a few tears, it meant so much to me that I’d been able to get enough fitness back to compete.  Hopefully its onwards and upwards from here, I might even be tempted to try some more qualification races next year for triathlon and duathlon and perhaps try my hand at cross duathlon as well?  I’ll do some more circuit racing and aim towards my British Cycling Cat 2 race licence and maybe a winter at the Velodrome……..lots to think about but for now I’ve made some amazing memories and found another level of strength I didn’t know I had!

…..and we still had two days left to relax before going home!