As soon as we left the hotel the climbing started, up and over the hill to the other side of the peninsular to Salen on Loch Sunart.   A very pretty tiny village with a little harbour with sailing boats. The road from now followed the shoreline Of loch Sunart with numerous little coves and off shore islands. The banks were densely wooded and the sunshine was glinting through, extremely beautiful and again reminded us a lot of New Zealand. The road was a single track with passing places but there wasn’t much traffic to negotiate as the road only leads to a village, Kilchoan, and the ferry to Mull. 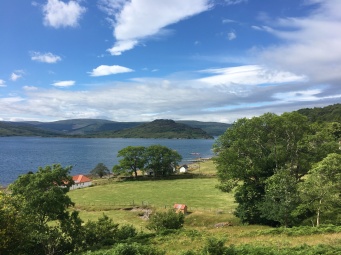 The road had contours like many roads in Cornwall, steep ups and down which barely show up on the elevation profile but drain your legs all the same. As we cycled along (east to west) we had a side head wind which was tough. The road had to negotiate another pass which meant another big climb but this somehow felt easier than the constant sharp ups and downs we’d experienced along the length of the Ardnamurchan peninsula. It was a climb where you just got in the right gear (not quite the 32’er this time) and got into a rhythm. Up and over the top and what should have been an easy descent to the ferry. Unfortunately the road surface was terribly potted and the wind was now a full on head wind so much so that we had to pedal hard at times just to make progress. The clouds had now come in and nothing looked quite as pretty as earlier in the day. There were two ferries we were considering catching, the 11:45 or 13:45. We pushed on and arrived at the ferry just minutes before 11:45. This was the smallest ferry we’d been on so far, more like a boat bus shuttling people to Tobermory on Mull to shop as there was very little in the way of shops on the whole Ardnamurchan peninsula. 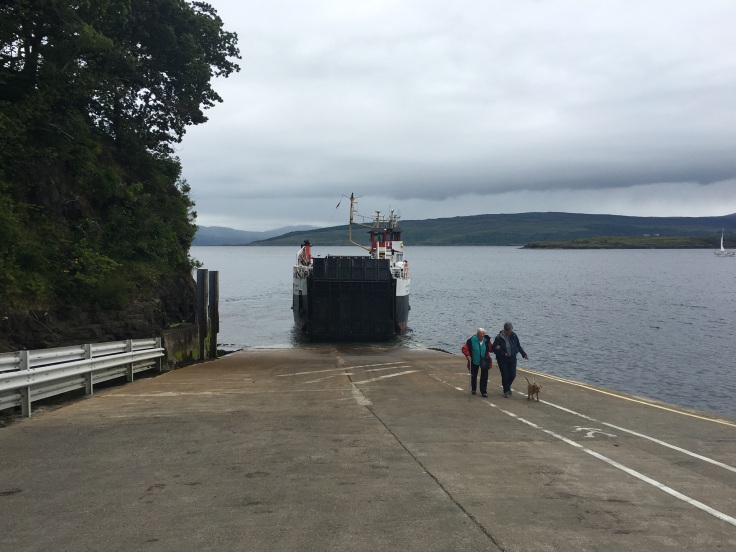 We sat in the little indoor seating area which smelt distinctly of dog and I saw a notice that said due to low tides the following ferries would be cancelled…. The list included the next, 13:45 ferry we had thought of catching, we breathed a big sigh of relief that we’d managed to catch this ferry otherwise it would have been another 3 hour wait like the other day and we would have been pushed to catch the ferry back to the mainland.

Tobermory is a pretty little port with all buildings brightly painted surrounding a pretty little harbour, we decided to find a nice café for lunch. We had two options now, the short, 20 mile route down the east coast of the island or a 43 mile loop of the northerly part of the island, a part which is meant to be particularly spectacular, but this did involve two 200m climbs and a couple of 100m climbs!  The forecast had been for heavy rain but this had changed to just 10% chance of rain so we decided to take the opportunity to explore the northern part of the island. We climbed out of Tobermory up a ridiculously steep hill, another 200m climb but as we neared the top moorland the wind was brutal, the drizzle was turning to driving rain and we could no longer see any of the hills through the swathes of rain sweeping the hillside. We stopped to chat and decided there was no point battling into the rain and wind for views which wouldn’t be visible in the weather. I said it gives us an excuse to come back again!  We turned back and enjoyed a respite from the hard cycling as we descended. As had been the case with our whole trip you couldn’t fully let go on the descents as the single track roads meant there could be a car just round the corner in your path.

The option we had decided to settle for was the short 20 mile route following the shoreline which we presumed would be flat. I’m not sure why we thought this because this had never been the case at any point during the rest of the trip, so why now……let’s just say it wasn’t flat!!  And that wind seemed to have moved round and again we had an epic headwind. Afterwards we discussed whether we were feeling so tired at this point because we knew we were nearly finished, almost like the body starting to relax, or whether it was just the cumulative effects of the mileage and the climbing, neither of us had really trained for this trip after all. Anyway we battled on into the rain and wind ticking the miles off. By this point in our adventure I’d decided I wasn’t riding on the front anymore, my rationale for this was that I was carrying much more luggage and so it probably balances out!

We arrived at the ferry at Craignure just 10 minutes before the next departure (another jammy manoeuvre and were able to walk onto the ferry past the cars which were going to have to wait for the next ferry. This was one of the things we’d loved about cycling and catching the ferries, you couldn’t book and so you could just rock up and board no problems, it was nice having this flexibility.

This final crossing was just 50 minutes back from Mull to Oban and the end of our trip. I feel a bit sad writing this now but at the time I was so glad to be finished!  Sitting on the ferry looking forwards to the cup of tea John had just gone to get a couple sat down next to me and asked where we’d cycled. It turned out this couple had owned a bike shop in the midlands and had a passion for cycling and bikes. One of the many things I loved about the trip was the people we met and the chats we’d a long the way.

Back in Oban we cycled back to the car and transformed ourselves from cyclists to drivers and drove to the hotel on the sea front just a mile away. Another one of my loves of these trips is the transformation, taking the bags off the bikes, wheels in wheel bags, packing the car systematically.

At MacKays we were shown to our room which had a massive Victorian bay over looking Oban Bay with chairs to sit and admire the view. It seemed I had yet again scored full marks with John for accommodation selection. As we hadn’t cycled as far today it meant we were at the hotel just before 6pm meaning we had 3 hours until dinner. We vegged in the chairs overlooking the bay watching the numerous ferries coming and going whilst drinking gallons of tea and eating biscuits. 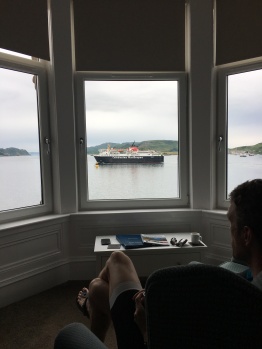 As I sat drinking tea admiring the view I thought of the beauty of the changing weather, how the magical mist veiled the hills with the trees wondering in and out!